Virunga National Park located in eastern DRC (Democratic Republic of Congo) is a UNESCO World Heritage, a Ramsar Site and the oldest national park in Africa. The park has incredible universal value for biodiversity and natural beauty, and is home to one of the planet’s last surviving populations of mountain gorillas.

Virunga also sits on vast quantities of natural resources including untapped oil which could bring the DRC up to being the second highest producer of oil in sub-Saharan Africa. The area has also been subject to a painful history, and ongoing conflicts and civil wars, making protection of the park both challenging and dangerous.

The DRC is one of the countries that has contributed the very least to global carbon emissions, yet will suffer the consequences the most through rising temperatures, increased extreme weather events, food insecurity and risks to water availability.

To explore this topic we connected with the incredible activist and campaigner Pascal Mirundi from the group Extinction Rebellion Université de Goma (University of Goma), to ask him what the situation is, what local activists are doing and what we can do to help.

What is the current situation with oil exploration in the DRC and Virunga National Park?

“Between 2005 and 2010, the Congolese government, through the Ministry of Hydrocarbons, approved oil concession contracts in favour of foreign fossil fuel companies such as Efora, Total, SOCO and Dominion Petroleum for exploration and seismic testing. This is contrary to Ordinance-Law 69-041 of 22 August 1969 on nature conservation and international conventions ratified by the Democratic Republic of Congo.

In 2019, the oil group Total held an oil exploration permit near the Virunga Park. Unfortunately, we do not know whether the contract has been terminated, as our authorities are silent on this matter.

The Virunga National Park is a biodiversity reserve, a refuge for gorillas and elephants. But its subsoil is home to oil reserves that interest companies from all over the world. Instead of being a source of joy, we are beginning to fear that it will be a source of suffering because many multi-nationals want to exploit it. If Total has a research permit that covers part of the park, almost 21. 5% of the park will be in danger because they will deforest it. In 2009, the DRC gave exploration permits covering 85% of the park’s area to Total, Eni and SOCO International (UK), whereas Congolese law prohibits any exploration in the Virunga mountains, The last two companies have assured us that they will not venture into the reserve, but the first one still wants to enter, with already the attribution of exploitation permits by neighbouring governments, such as Tanzania and Uganda, we fear that the Congolese authorities will do the same.”

How could oil extraction affect the people in and around Virunga and the ecosystems there?

“The effects of pollution can easily reach the ecosystems of Virunga Park and if the waters of the Semliki River become polluted, the whole hydrography of the basin will be affected.

For us, oil exploitation will not only destroy these ecosystems, it will also affect the communities that depend on them for their survival, especially here in Africa, where oil activities have consistently caused environmental damage, human rights abuses and fuelled conflicts with, among other consequences, extrajudicial killings. Fossil fuels are the largest source of greenhouse gas emissions. As signatories to the Paris Agreement, our leaders should commit to limiting the activities responsible for these polluting emissions.”

What would you say to people who argue that oil extraction would bring money to the local population and the region?

“These people are not wrong, extraction will bring money but to whom? And to do what?

My country has multiple mineral resources such as Lithium. The Democratic Republic of Congo has the seventh largest reserves of lithium in the world (in a ranking dominated by South American countries) with resources estimated at nearly three million tonnes. Like cobalt, lithium is an essential component of batteries and vehicles, computers and mobile phones.

Coltan is also found in large quantities in the DRC in the KIVU region, which holds between 60 and 80% of the world’s reserves. According to data from the Chamber of Mines, the DRC produced 869 tonnes of coltan in 2016, down 12% on 2015 (992 tonnes) and many others.

Economically, despite the production of 90,000 tonnes in 2018, for example, three quarters of the Congolese population live on less than $1.9 USD a day.

The regulation of the mining industry is practically non-existent in my country, and the institutions are very weak. This leads to widespread corruption, numerous frauds, and contracts that are very favourable to foreign multinationals and we know that similar things could happen again if they ever exploit the oil in Virunga National Park. Let’s look at the province of Bas-Congo in Muanda, the Franco-British company Perenco has been exploiting oil since 2001 but the life of the local population remains deplorable.

So we must be able to balance the 10 billion dollars that could be made with the future of our World. Virunga National Park is one of the world’s lungs that gives us fresh air and fights global warming.”

Can you tell us about your campaign group and the actions and activities you have carried out so far?

“We have been carrying out mobilisation activities as Extinction Rébellion Université de Goma for two years now to raise awareness among the population about the dangers of oil exploitation in the Virunga National Park on all fronts. Whether economic, social or environmental, we do not see responsible and effective measures that can reassure all humanity that these threats will not disappear.

We are carrying out activities of citizen awakening to bring back this population to understand its true place in the decision-making process and to boost our authorities to take good decisions because each population deserves good leaders.

We organise citizen visits, peaceful markets, sit-ins, artists’ performances to bring back our leaders to be aware but also to take good decisions because, being our representatives, we have the power to sanction them if they don’t manage to take measures that reassure us of a better future.

It would be so disappointing that one day we would be unable to answer our children who would like to know where the mountain gorillas who live in Virunga Park today have gone.”

What actions are you planning for the future?

“We are still in the process of mobilising our allies and we plan to take action at the global level with different organisations, associations and movements to ask:

Non-violence is a struggle which, in order to win, we need allies. We want to meet with the local population but also with decision-makers at provincial and national level, to meet with members of parliament to tell them about our point of view on the issue of oil exploitation in Virunga Park, and also to come up with a participatory management plan between the population and ICCN (Institut Congolais pour la Conservation de la Nature), which represents the Congolese state for all the parks in the DRC.

For the success of this action, we will have to mobilise a lot of people and with the crowdfunding that we are going to initiate, the fund will help us to carry out our lobbying sessions with the leaders.”

What can people in the rest of the world do to help?

If we have to protect this reserve, we have to accept that there are two things that can never be dissociated “environment and population” they are two and always exist together. We cannot pretend to protect the Virunga National Park if we do not want to respond to the clear demands of the populations bordering the park.

We ask the national and international opinion to remember that there is a population that has accepted to leave their arable land so that our future can be reassured and it is disappointing to see that the polluting countries do not manage to pay their debts and that the little that can be sent only benefits a handful of people. So we ask the signatory countries of the United Nations Framework Convention against Climate Change, at the Earth Summit in Rio de Janeiro in 1992 to put in place a framework that can address the needs of the people living along the coast.

We ask the global environmental organisations to show solidarity because alone we will achieve nothing.” 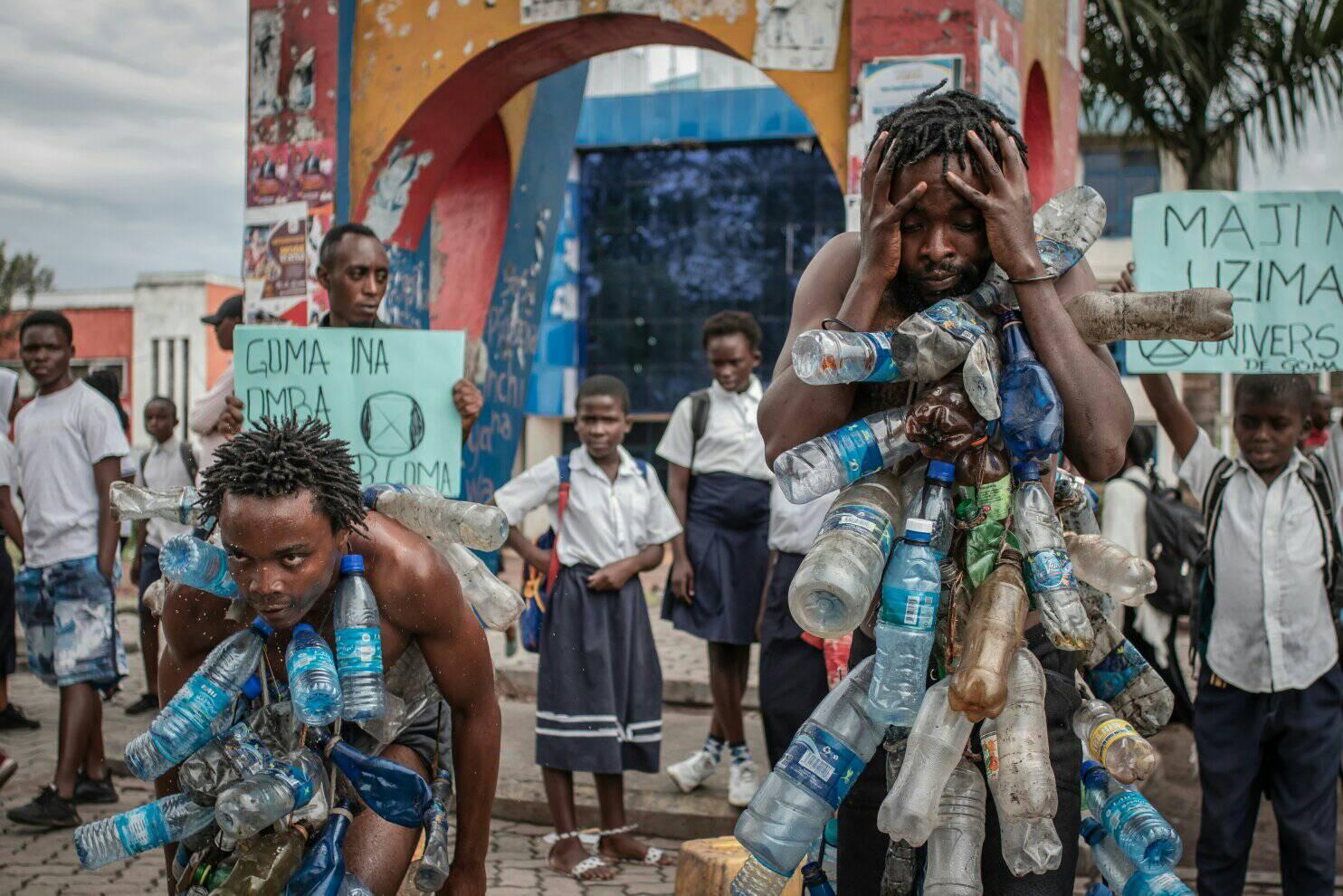 above – Mobilisation action by XR University of Goma on freshwater management 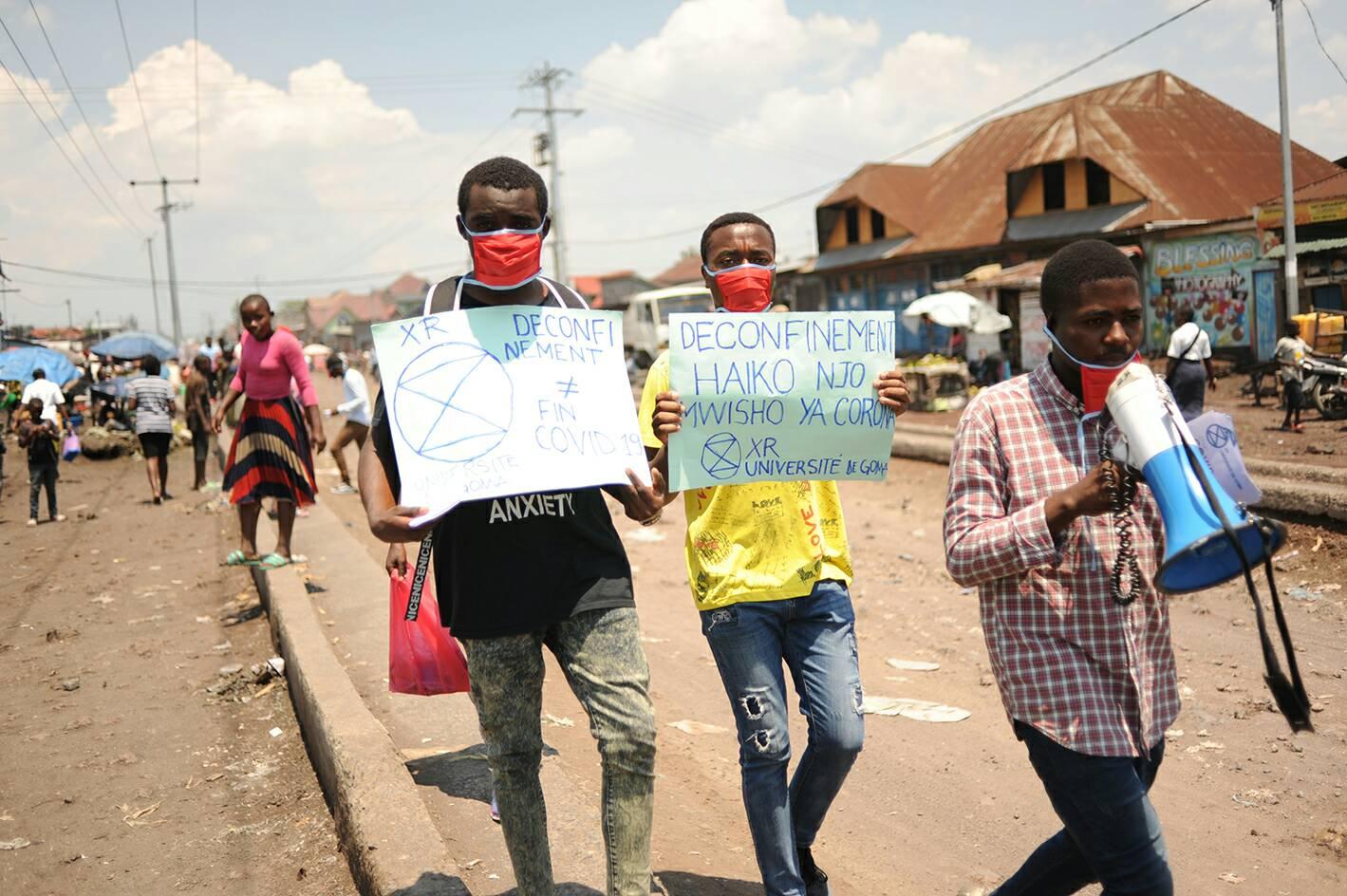 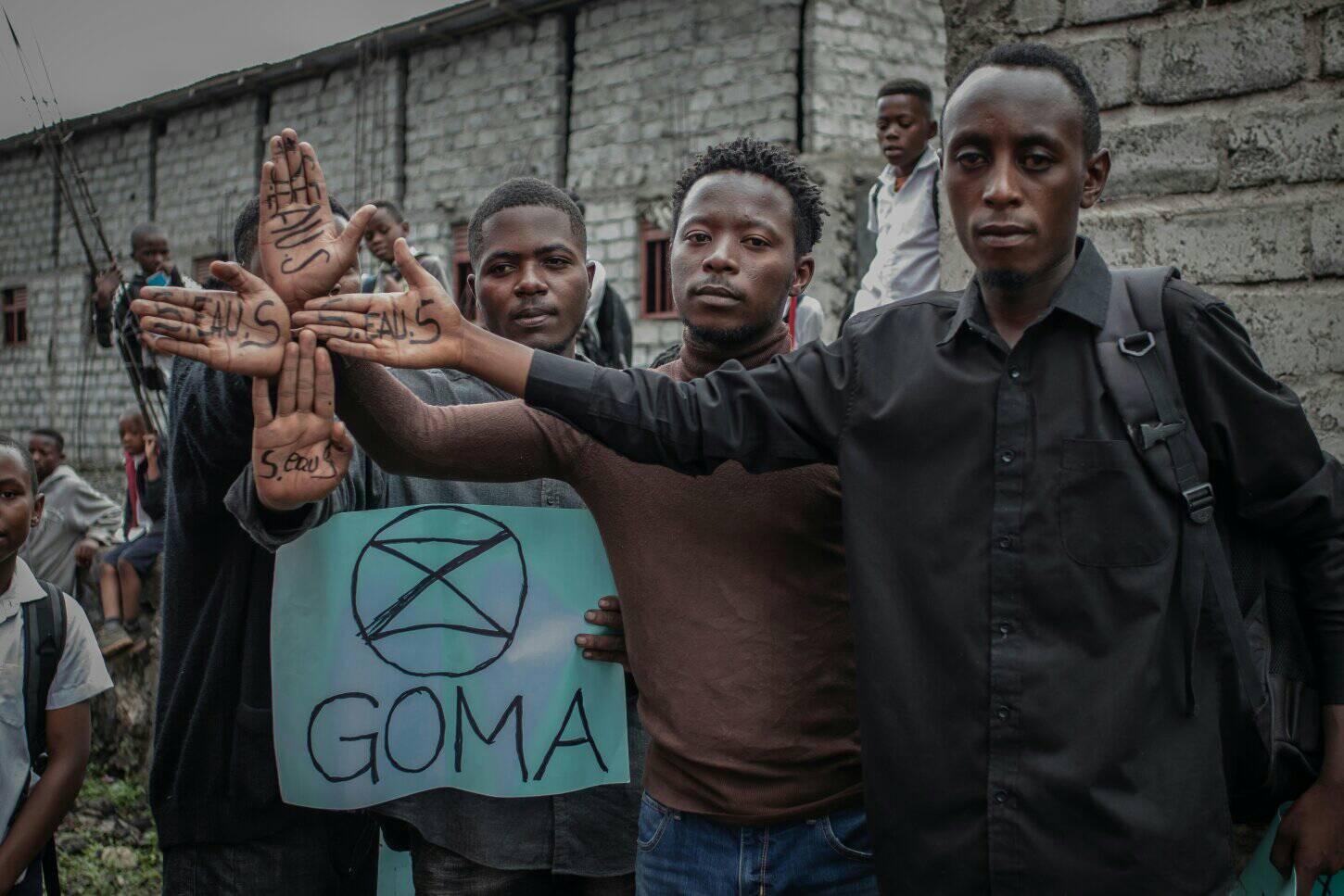 Above- photo of Pascal Mirundi

Pascal Mirundi is a 22 year old Law student from the University of Goma, and one of the founders of XR Université de Goma. This is his story about becoming an environmental campaigner:

“In 2016, when I was still 17 years old, the DRC was going through a crisis, President Kabila had just come to power once again because he did not want to organise elections, multiple popular uprisings were organised and at that time a terror was installed, in Beni in the province of North Kivu, massacres saw the light of day, a group of so-called ADF-NALU was killing the population with machetes, unable to remain silent in the face of such injustice, endless suffering. I joined the LUCHA (struggle for change), a non-violent, non-partisan movement of Congolese citizens who believe that in order to change the Congo, the population must be demanding of its leaders, because each population deserves a good leader.

The LUCHA movement chose non-violence after having understood that violence is only an endless circle, violence only gives violence especially in a country where everything is managed by violence.

This movement was my very first school in citizenship and thanks to it I discovered the reason for my coming on earth which is the protection of the ecosystem. This ecosystem needs us to make it the best of us, to protect it, to conserve it, to love it, to cherish it because it is the sine qua non of our life.

This struggle over the environment is multi-dimensional because even the existence of our children is tied to this struggle, and there are times when I think that if one day we have to leave something of paramount importance to our children, the first would be this healthy ecosystem.”