We’re taking a curious look at the gender gap on social media and how this relates to the real-life gender gap in climate science.

Here at Curious.Earth we noticed that a surprising percentage of our Instagram followers identify as women – a staggering 71.8%! We decided to undertake some new research and find out whether other climate crisis related accounts had the same split. We found that of the 19 accounts we spoke to, with a total of 1.53 million followers, the average percentage of female followers was 72.5%.

We contacted a variety of accounts covering all sorts of climate-related topics: anything and everything from activism, climate justice, news reporting, and awareness to science, veganism, energy, biodiversity, and sports. The account with the highest % of female followers was @storiesbehindthings, an awareness raising account with a massive 92.7% of their 28,300 followers identifying as female! The lowest % was @protectourwintersuk, an outdoor sports account, with just 38.6% of their 9,200 followers identifying as female. Though, this didn’t come as a surprise given that extreme sports has traditionally been a more male-dominated arena. What did come as a surprise is that there wasn’t more of an obvious male bias on other traditionally ‘male’ topics such as energy, science, and law – in fact we saw a range of female followers between 55% and 87% across all topics. 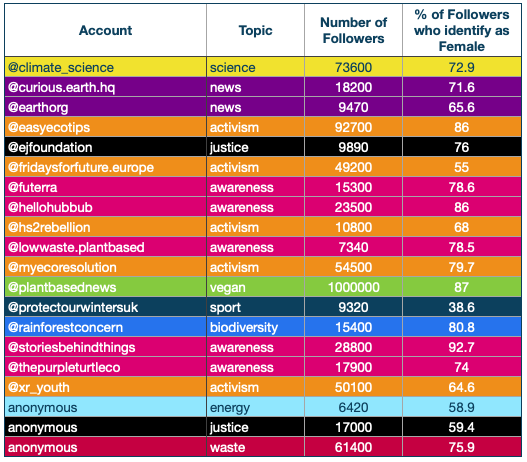 Female environmentalists vs. Females in STEM

Research has previously shown that women care more about, and are disproportionately affected by, climate change. Research undertaken by Yale University showed that a higher percentage of women worry about global warming and support climate change mitigation policies. However, the same research also evidenced that fewer women than men had a good scientific understanding of climate change. The 2015 Paris Agreement recognised that women’s roles as caregivers, often with responsibility for gathering food and fuel, and the increased likelihood of them experiencing poverty makes them particularly vulnerable to the effects of climate change. The Agreement even made provision for empowering women to try and counteract this.

So we’re asking, if this is the case and women are also more engaged with the cause on social media, why are they still so underrepresented when it comes to climate science?

Women in Science: The Facts

Taking a look at the stats around women in STEM is pretty gloomy stuff – females are still depressingly absent from many fields, with only small percentages of degrees and jobs going to women.

In UK academia, a report by the Royal Society of Chemistry found that only 44% of chemistry undergraduate students are female, even less (39%) at PhD, and that this drops even further to just 9% at professorial level. This was backed up by UCAS data (from 2019) which showed that just 39% of Physical Sciences students and only 19% of all Engineering and Technology students were female. The same picture can be seen around the world, with a United Nations study of Science and Engineering subjects showing that at Undergraduate and Masters levels, women represent 55% of students, but only 43% of PhD students and an even smaller 28% of researchers.

Sadly the stats don’t improve when it comes to the world of work. The latest data from WISE (Women in Science and Engineering) shows that women occupy only 24% of core-STEM jobs (jobs in science, engineering, information and communications technology). Whilst the data on ‘professional science’ roles is encouraging, with 46% of positions going to women, this drops to just 15% when looking at STEM Managers. In the field of climate science, women don’t fare any better. Female contributions to the IPCC (Intergovernmental Panel on Climate Change) remain stubbornly low, having risen from 5% in the original 1990 report to just 20% in the 2013 report.

In spite of all this, we know that if we are to tackle the climate crisis, we must engage women. Currently, only 30% of positions on national and global climate negotiating bodies are held by women, yet research has shown that women in government are more likely to sign international treaties relating to tackling climate change. Modelling of solutions to reducing carbon emissions has shown that improving education for women and girls is one of the most effective actions we can take. 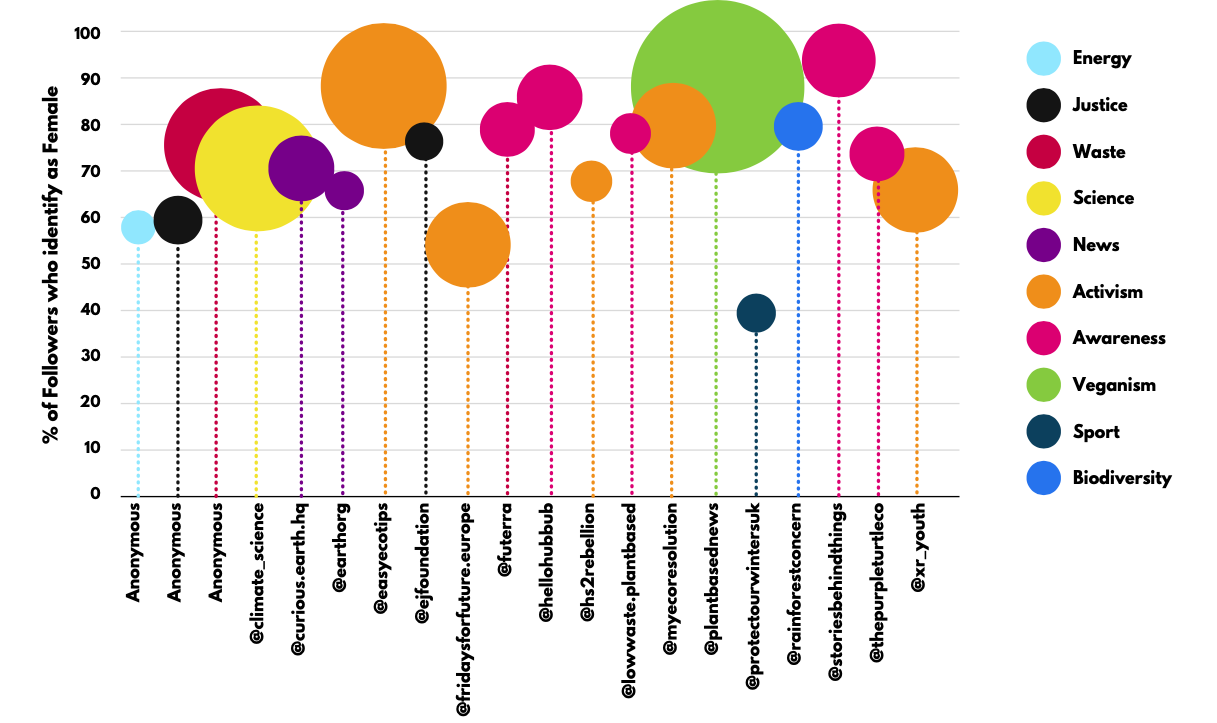 So how do we move from women engaging in climate content on social media to women participating in climate science and policy-making?

Empowering and inspiring girls to take the first steps into science education is one way we can help make this change, and we can do this by exploiting the channels we know they are using. 72% of 1.5m followers represents over 1 million women that are exposed to climate crisis related content. If we can use this content to open up the doors into science then that’s just the first step on a long journey. A journey that we need to take for the sake of women everywhere and for the sake of the planet.

A massive thank you to all the accounts who responded to our request about their followers – they are all fantastic places to find climate info, news, and inspiration so head on over and give them a follow!