The development of plastics has been one of chemistry’s most influential inventions in recent history. A cheap and versatile material that can turn any design idea into reality, its contribution to technology, medicine, art and more is immense. However, today it seems that everyone wants to make it disappear. Grocery bags, soft-drink straws, beer plastic rings, and others have become the number one enemy of consumer goods corporations.  Plastics are a huge environmental and social issue; but plastic can also be instrumental to achieve a circular economy if correctly utilized and managed.

How plastics saved the elephants

Ivory from elephant’s tusks has been a prized commodity since the beginning of time, but the slaughtering of elephants for its sake reached its peak in the 19th century. The reason? Billiard balls were made of ivory, and the game was immensely popular. The mismatch between supply and demand drove American chemist John Wesley Hyatt to invent celluloid, one of the first plastics and one very well suited for mass production of billiard balls. But it was not only elephants, tortoises could also breathe a sigh of relief! With the arrival of synthetic materials we no longer needed their shell to make combs, eyeglass frames, or custom jewelry.

Victim of its own success?

When we speak about plastic, we are speaking of a wide range of synthetic materials made out of polymers – materials made of long, repeating chains of molecules. The main common characteristic lies in their plasticity, which makes it possible for plastics to be molded, extruded, or pressed into solid objects of various shapes. The laptop I am using to write these lines is made from plastic; just like the bottle of water I have on my desk. It is hard to look around and not see plastic or plastic components in any civilized human environment.  This extremely useful material has nonetheless become the symbol of all things wrong with mass production and linear economy. What went wrong?

There are many reasons. First, plastics take decades or even centuries to decay naturally or biodegrade. If not correctly disposed of, they can end up polluting the ocean where species may mistake them for food. Second, plastics are a byproduct of oil, which means we need to rely on oil extraction to make them. Lastly, and most importantly, plastics have become a victim of their own success: they are so cheap and adaptable that they have enabled a “single-use” culture. Seldom are other materials used and thrown away with so little regret, with plastics having created a previously unseen level of waste.

Single-use plastic is therefore being universally targeted by the sustainability marketing campaigns of corporations, with promises left and right to reduce their consumer-facing plastics (please note the nuance, “consumer-facing”. Making plastic disappear from entire supply chains would be extremely hard and doesn’t have enough visibility to make it worthwhile). This plastic obsession has reached almost comical levels – with airlines such as Ryanair boasting of plans to ban single-use plastics such as straws from their carbon dioxide exuding cabins. Same goes for JBS, one of the main meat packers allegedly linked to deforestation in the Amazon basin, making similar bold promises about their plastic use.

This is not an uncommon approach to sustainability by corporations: picking measures that are easy to implement and to communicate – but that are completely peripheral to the core business model. Plastic straws and bags perfectly fit the bill. For instance, fashion retailers have been quick to make plastic carrier bags disappear while continuing to mainly manufacture their garments in polyester (a plastic, too) as we explained in a post a few months ago, and with little being done to recycle it.

The plastic-hating frenzy responds to one common misconception that is very present in many sustainability discussions: anything that looks “natural”, like paper or cotton, is better for the environment than something synthetic. This is an instinctive and romantic way of thinking, but certainly not very scientific. Truth is that plastic bags, as opposed to paper bags, need less water to be made, do not rely on forests, and are more resistant, so are more likely to be used multiple times. This is also the case for straws. McDonalds had to famously acknowledge, after banning (recyclable) plastic straws, that their new paper ones were not recyclable at all.  The demonization of food packaging follows a similar pattern. It is odd and frustrating to see all those veggies individually wrapped in the supermarket. But according to some studies, wrapping the vegetables increases the life of the food in the shelves by 6 days… which makes plastic a good tool to avoid food waste, which is one of the main sources of greenhouse gases (we probably should be producing less food, but that’s a different story).

A good starting point to address the plastic problem is to come to terms with the fact that they cannot be eliminated: they are simply too useful and too present. The good news is, they don’t need to be. We just need to make them better.

First, we need to break the single-use habit. Single-use plastics need to either disappear or be heavily taxed. To this end, we need to improve traceability of plastic waste. Plastics are being remarkably poorly disposed of. They are usually mixed in different waste streams, exported to third countries and finally thrown into the ocean. It is estimated that more than 90% of plastics that end up in the ocean come from only 10 rivers. This means tackling the problem is within reach. Reuse and recycling needs to be promoted. Many plastics can be recycled entirely – there is currently no reason why a soft drink bottle wouldn’t be more circular than a glass bottle (not to mention a tetra brik). But for that, we need to hold companies who put plastic in the market accountable. 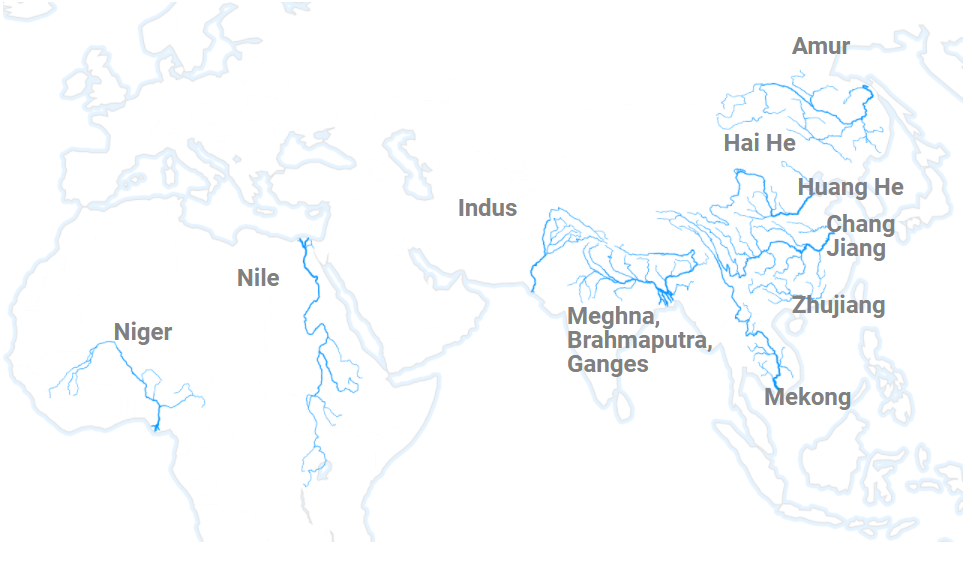 These 10 rivers carry more than 90% of plastic waste that ends up in the oceans. Source: UNEP

Some companies have already taken this approach: Unilever, a consumer goods giant and a leader in sustainability within the corporate world, has pledged not to stop plastics but to make them recyclable for 2025 – and to recycle more plastic than they put into the market. Lego has recently announced advances in the use of recycled plastic that fulfills the stringent quality criteria of its famous bricks. These are promising initiatives and very committed ones – as they touch the core of their business operations.

Additionally, we also need the commitment of governments to ensure sound waste management policies are in place. All too often we see a label on a bottle claiming it is “recyclable”, but upon reading the fine print one finds it will not be because the required infrastructure does not yet exist (this is often the case, for instance, with bioplastics made with corn among others).

Plastics are an extremely successful invention, and it’s not just the elephants and tortoises who are better off for them. After all, those facemasks our incredible Doctors and Nurses,  have been wearing all year are made of polypropylene – a plastic – too…

Have a look at Ecoalf, the fashion brand that recycles plastic from the ocean into new (and nice!) garments.